Mark has developed a visual language inspired by a myriad of sources. Consequently, each of her works is a complex fusion of materials, gestures and symbols. Her engagement with the surrealist visual world early in her career laid the foundations for her ongoing exploration of the nature and materiality of physical objects. In keeping with her interest in architecture and a skilful balance between construction and emotional power, Anna Mark’s art unfolds in the form of reliefs, gouaches, pen drawings, aquatints and etchings. Later, architectural compositions came to greatly impact her visual language – an influence that still carries into the present day. In terms of content, however, her works – framed by a strict formal order of geometry – convey the reality of, and inspiring force inherent in, the order of the world.

A bilingual monography will be published by the museum on the occasion of the exhibition. 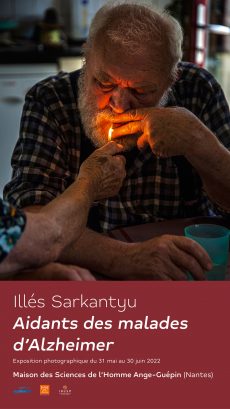 In a context of demographic and health evolution and of reflections between national solidarity and family solidarity to face the consequences of this evolution, the management of dependence has raised the issue of care in the legal, media and scientific space. A new field of research has emerged over the last ten years or so which places the carer at the centre of a very broad scope, in which issues relating to the collective and personal dimensions of support meet, often with political and social implications in relation to a recognition which is still under construction.

Find out more about this exhibition here!

The Musée d’Art Moderne presents a new tour of the permanent collections, showing the museum’s key works alongside works that are rarely or never exhibited. The contemporary exhibition is structured around the acquisitions and donations of over 40 young French and international artists. Monographic rooms, such as the one devoted to Jean-Michel Meurice (a donation from Françoise Marquet-Zao).

In memory of the strong friendship between Jean-Michel Meurice, Zao Wou-ki (1920-2013), since 1964, and Françoise Marquet-Zao, the latter has made a very generous donation to the museum in 2022 which reflects the important stages of Meurice’s pictorial career since the end of the 1960s, complementing the two works already in the collections. The artist participated in the hanging of this room of the museum, which is intended as a tribute to him.
Echoing the presentation of these paintings and collages, a selection of films illustrates his activity as a film director and his commitment to documentary film from the 1960s onwards, dealing with art as well as social and political issues. In the 1980s, together with Georges Duby, he created La Sept, a cultural television channel that was to become Arte. This film activity must be seen as complementary to his painting, with which it resonates perfectly and without any hierarchy.

At the Galerie La Forest Divonne you can discover the exhibition l’OEuvre au Corps with the artist Valérie Novello.

This new exhibition at the A+Architecture agency is dedicated to the ex-voto, from its traditional form to its contemporary interpretation.
Taking the form of an offering or a thank-you due to a wish most often fulfilled, this object of passion combines many elements and feelings in its multiple representations, tackling themes as diverse as anatomy, the animal, marine or terrestrial world.

With works by Vincent Bioulès. 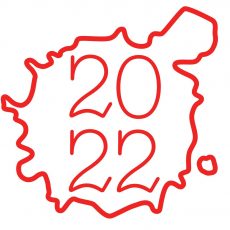 On Wednesday, May 11 from 6 to 9 pm, on the occasion of the Nuits des Galeries du Parcours de Saint-Gilles 2022, come and visit the exhibition ‘Singularities’ by Catherine François.

Rachel Labastie presents a work at the Royal Museums of Fine Arts of Belgium that takes a feminine look at Jacques Louis David’s famous piece, shifting the focus from Marat to Charlotte Corday, the absent protagonist in David’s depiction.

The Royal Museums of Fine Arts of Belgium has owned Jacques Louis David’s masterpiece “Marat assassinated” (1793) since 1893. To testify to the central position of this painting in the advent of modern art, they are offering an exhibition with an unprecedented approach to David’s work by combining both historical and contemporary views. 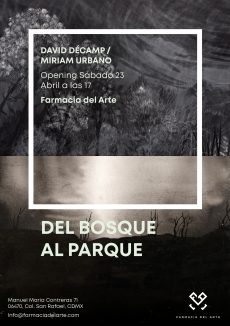 For the first time David Décamp exhibits in Mexico at the Farmacia del Arte gallery, alongside the Mexican artist Mirian Urbano.

In the exhibition “Del bosque al parque”, the ambivalence of their messages inscribes a narrative around the imbalance that our intervention on nature creates. In Decamp’s work, splashes of ink, depicting the shapes of trees, give the impression that the forest is bleeding while the large blurred landscapes give the impression of a no man’s land at dusk, has humanity written this dark path for itself by recklessly sacrificing nature to fulfill its needs?

Urbano’s drawing reveals itself little by little. At first glance, everything is accessible, it’s darkness. The viewer gradually discovers a mysterious virgin forest of infinite depth through layers and layers of native plants, untouched, untamed, and their shadows become light standing out from the black background. 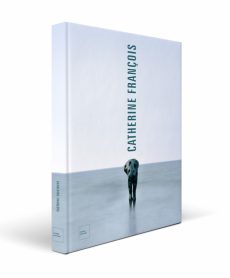 Thursday 21 April from 6 to 8 pm, come and meet Catherine François in her exhibition ‘Singularités’ for a signing of her new monograph published by Prisme Editions on the occasion of the exhibition.

You will also discover the singular figures made of bronze and objects washed up by the sea that the sculptor has created over the past two years. “A turning point whose overall view instantly impresses the eye”, according to Alienor de Brocq in Le Soir MAD.

Portraits of artists and photographs of filmmakers in the perspective of time. The exhibition of the Budapest Műcsarnok at the Hungarian Academy in Rome.

With photographs by Illés Sarkantyu.

With artworks by Alexandre Hollan

The exhibition “You are a tree!” at the Franciscaines in Deauville is on until 5 June 2022.
From the Middle Ages to today, the exhibition presents more than 80 works with a focus on modern and contemporary art: Pierre Bonnard, Henri Matisse, Carl Andre…

Among them, you will find the work “Daphne” by Vincent Bioulès, an update of the myth by this major painter of contemporary figuration who inscribes the characters in the landscapes of the Gard, dominated by the Cévennes. An eternal race that ends up eroticizing the whole landscape.

In the exhibition, a series of drawings of trees by Alexandre Hollan will have a special place. Hollan’s unique approach to the tree, somewhere between painting and poetry, is the result of a lifetime of contemplation and aesthetic meditation. 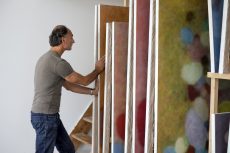 Marie Hélène de La Forest Divonne and her team are pleased to invite you to a conversation between the artist Jeff Kowatch and the art historian Jeanette Zwingenberger, on Tuesday 8 March at 7.30 pm (12 rue des Beaux-Arts, Paris 6e)

Mr Sennelier, creator of the Sennelier oil stick, will speak at the beginning of the evening.
This event is organised on the occasion of Jeff Kowatch’s exhibition “Breath” which brings together a group of recent works – oil paintings on canvas and oil sticks on Dibond. 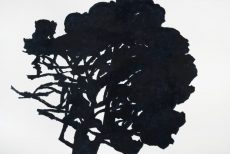 In 2021, Alexandre Hollan made a further donation of some of his works to the Budapest Museum of Fine Arts, which is devoting an exhibition to him until February 2022 in the Hungarian National Gallery.
Alexander Hollan’s links with the museum span two decades. Since 2001, he has made several donations of his works to the museum and already in 2011, the Museum of Fine Arts presented nearly one hundred of his works in a large-scale exhibition. In 2017, the artist made another major donation of more than 100 of his pieces. This material now enriches the collection of international art after 1800 and the collection of prints and drawings of the Hungarian National Gallery, as well as forming an important unit within the collection of works by 20th century Hungarian émigré artists.

A trilingual (Hungarian/French/English) catalogue on Hollan’s donations is published in conjunction with the exhibition, including a study and interview with the artist to provide a broader context for his works. 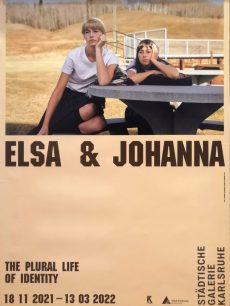 Invited by the Städtische Galerie in Karlsruhe for their first solo exhibition in Germany, Elsa&Johanna have designed a presentation of four of their series especially for the museum’s spaces.

This important retrospective exhibition brings together nearly 150 works by Elsa & Johanna, from the series A Couple of Them, Los Ojos Vendados and Beyond the Shadow, to The timeless story of Moormerland, a new series created in Germany in the spring of 2021. 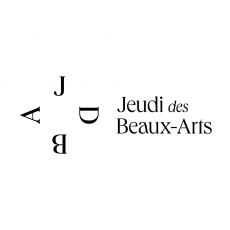 The nocturne of the galleries of the rue de Beaux-Arts every first Thursday of the month until 9pm!

Click here for more informations about the Fine Arts Thursday 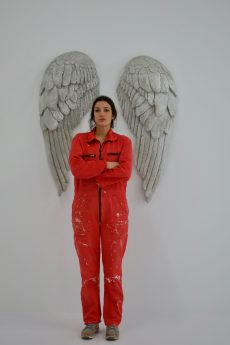 Rachel Labastie has been invited by the Royal Museums of Fine Arts of Belgium to present this autumn a body of work, sometimes unpublished, sometimes retrospective, of some thirty emblematic works of her work. Her entire oeuvre is duality and makes us see beyond the appearance of things; a concept that she will explore in depth in a piece created ‘in residence’ within the Royal Museums, in dialogue with a painting from the permanent collection. The work is imagined as the ‘off-screen’ of ‘The Death of Marat’, Jacques-Louis David (1793) and will be unveiled at the opening of the exhibition.

Click here for more information on the exhibition “Remedies”. 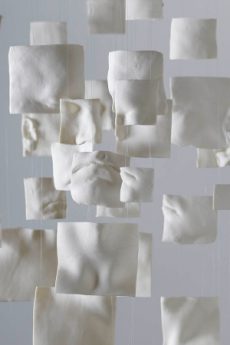 Samuel Yal has been invited by the Musée de l’Homme to design a specific installation for the exhibition “Aux frontières de l’humain”. This exhibition, never before seen at the museum, questions our future as human beings but also, more globally, that of our planet through an itinerary divided into six parts. How far can we go while remaining human, individually and collectively? Has the race for progress not been made at the expense of our planet? These questions at the centre of the exhibition are in line with one of the major questions at the heart of the permanent exhibition at the Galerie de l’Homme: where are we going?

For Samuel Yal, artistic thought is special in that it is based on concepts, reflections and projections that meet the specific constraints of the medium and the studio experience. In this complex weaving of will and chance, an experience of the work is interwoven that in a sense reproduces that of life itself.

Rachel Labastie has chosen to evoke, in Maubuisson, the living conditions of two communities of women excluded from society in the 19th century. The “relegated women of Guyana”, women convicted of petty crime and sent to Guyana, then a French colony, to marry convicts. On their arrival in French Guyana, the convicts were entrusted to the sisters of the Abbey of Saint Joseph de Cluny. The overseers and the overseen shared the same conditions of separation and internment. Island, prison, shelter, the abbey becomes in Rachel Labastie’s artistic project an ambivalent place where a set of narratives evoking forced exile, the journey of tragically misguided women, the transformation of bodies, between resistance and sacrifice, is staged.

Click here for more information on the exhibition “Les Éloignées”. 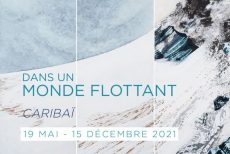 Caribaï has been invited to present her artistic work in 2021 in the marble and glass setting designed by Kenzô Tange, amidst an exceptional collection of Asian art. Inspired by the place, she articulates in this original creation two principles of Chinese landscape painting that are dear to her: “Wind-Light” and “Mountain-Water”. From the suspensions to the polyptychs, she accompanies the visitor on his or her museum journey, from the bottom of the staircase to the space of the Buddhist rotunda on the first floor, and guides him or her on a journey that is above all interior. 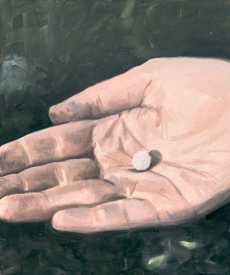 The Musée de la Vallée – La Sapinière welcomes new paintings by Arthur Aillaud, son of the painter Gilles Aillaud and grandson of the architect Emile Aillaud, whose family roots are in Jausiers.

A dialogue between nature and architecture, between abstraction and figuration. A singular exhibition that could tell the story of the work of archaeologists at work, but not only…