A self-taught artist with a dark sense of humor, close to the art Brut, David Décamp began his life as a lumberjack in the forests of the Jura, before developing his artistic practice. His works are anchored in this forest environment from which they draw their materials (such as wood and bone) and their forms, mainly those of trees and branches, but also the figures of fauna, or animals that populate it: deer, roe deer, birds… Everywhere, however, it is man that Décamp summons, in his original nature, integrated into his environment. An integration which he deplores being broken, and of which he seeks the memory.

The sculptures will be articulated around the enigmatic work Le Bûcher est servi (The pyre is served): a surrealist staging of the death of Nature, symbolized by the horns of a stag. The coffin is surrounded by tree trunks sheathed in lead, whose lines Décamp has reworked in such a way that they evoke the torsos of men, like so many funeral bearers. Elsewhere, Décamp declines his materials, and spells out his warning to modern man who is too forgetful of his roots. Everywhere the artist’s statement is balanced by his humorous look at things: Un Pas de côté, the title of the exhibition, that Décamp invites us to take, to find ourselves and to look at the world differently. One can cite Circuit de mes os usés, a plumbing course whose stylized form evokes a body, not without kinship with the Maneken Pis.

Décamp’s work is committed and strong, carrying a message of warning, without ever leaving aside the poetic power of art, which is expressed in the originality of his sculptures and in the refinement of his creations. 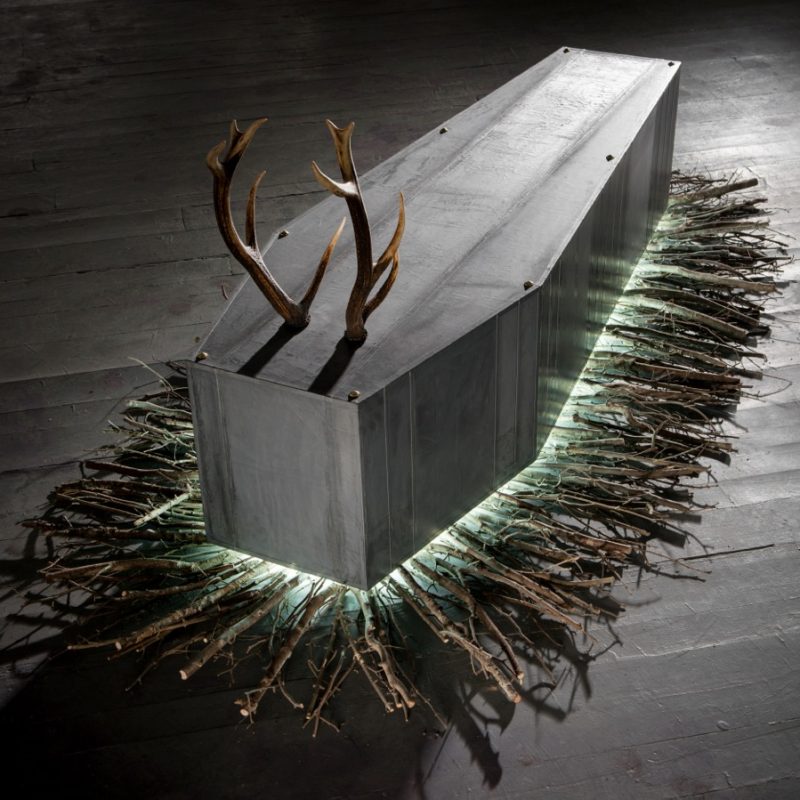