From October 13 to November 19, 2022, La Forest Divonne gallery will present a new solo exhibition of Illés Sarkantyu, curated by Didier Quilain.
The exhibition is realized with the support to the galleries / exhibition of the Centre national des arts plastiques

Photographer and filmmaker born in Budapest in 1977, Illés Sarkantyu is a graduate of the University of Decorative Arts in Budapest. He lives and works in France.

The exhibition at La Forest Divonne Paris gallery will unveil this variety of approaches characteristic of his work through the presentation of several series of photographs made over the past twenty years: from “Mihaly” (2011) to “Ombrées” (2013-2014), then “Paraphrases” (1994 -) and “Hervé (2007-), a photograph of which was exhibited in 2016 at the Petit Palais during the exhibition Dans l’atelier, l’artiste photographié, d’Ingres à Jeff Koons.

A particular look at heritage will be revealed in the series “Gavrinis” (2017), resulting from a collaboration with the Domaine de Kerguéhennec where the artist retraces in a very poetic way the history of the megalithic monument located in the Morbihan.

Finally, the public will be able to discover the most recent series “Romantic, Clinical, Iconic” which presents unusual objects: a project of reappropriation realized in Bordeaux, the city he lives in, from objects found in the street, which are collected, archived and photographed by Illés Sarkantyu who erects them as totems of contemporary life.

This series of photographs, presented at the Kunsthalle in Budapest in 2021, has never been shown in France before and will be presented for the first time by the gallery La Forest Divonne in Paris. 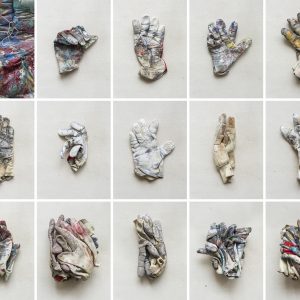